How to Show Your State Spirit? Say it with State Art Paintings!

It's amazing and surprising that state shapes make such interesting art subjects! Our state art paintings have become some of our most popular sellers and, in the process, we hear a lot of unique stories about why people have bought them! I thought it would be fun to share a few of the reasons customers have shared with us, and maybe inspire a few ideas in the process! By the way, they make great gifts for the holidays or any time of the year for that matter!

A Gallery Wall Collection. We caught our "resident model" -- aka Joe -- hard at work so we snapped a quick photo of him! The grouping shown here of nine states was for a recent photo shoot. We borrowed a few pieces before they were being shipped out to their new homes. But if you have a connection to this many states, it makes a great gallery wall collection to say the least! Even a grouping of three or four states makes quite an impact!

A Going Away/Welcome Gift. We received an order for one of our large Michigan state art pieces. She told us it was for a going away party for a neighbor. She was having everyone on the block sign their names on the pallet as a "guestbook" of sorts. What a great piece for the relocating family to take with them! We've had several real estate agents give these as closing gifts too, both as a way to welcome new owners to the state and to say goodbye to those moving out!

Personalized, Meaningful Art. One customer said her motivation was two-fold. She wanted a way to make the art in her family room more personal AND incorporate the colors in her decor. She bought four of our 14" x 14" states states representing the places each family member had been born, combining the colors in her room (neutrals, blues and reds) for the grouping.

As part of a gallery wall grouping. Another great way to use these states is as part of a gallery wall grouping. This one also includes some number art representing the number of family members! Interestingly, Texas is the state we sell most often. I guess Texans have a special pride...who knows! It's also probably one of the most interesting and recognizable state shapes.

We have done paintings of almost all the states, but for reasons unknown to us, some states seem to be more popular, at least as subjects for paintings! As mentioned, Texas is probably the most requested state, but we also get a lot of orders for California, Michigan, Illinois, South Carolina, Florida, West Virginia, New York, Tennessee, Georgia...well, the list goes on! Here are some examples of a few of them. Can you name them? 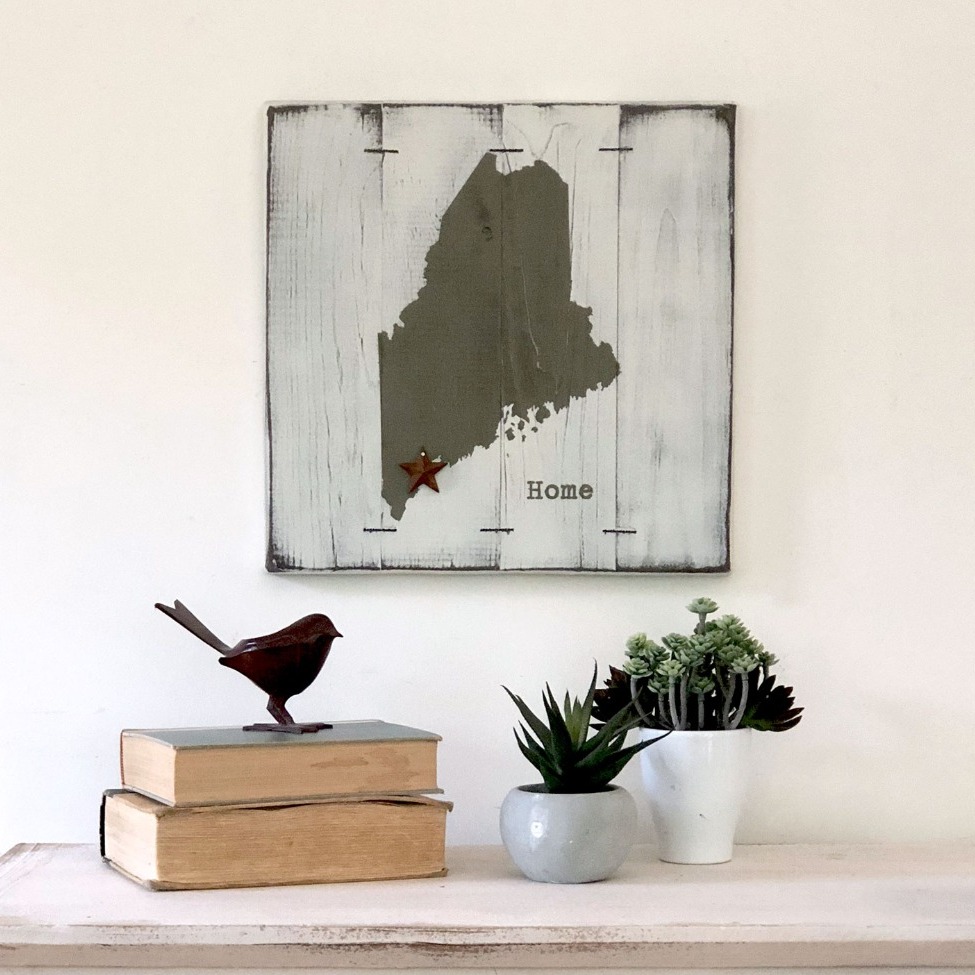 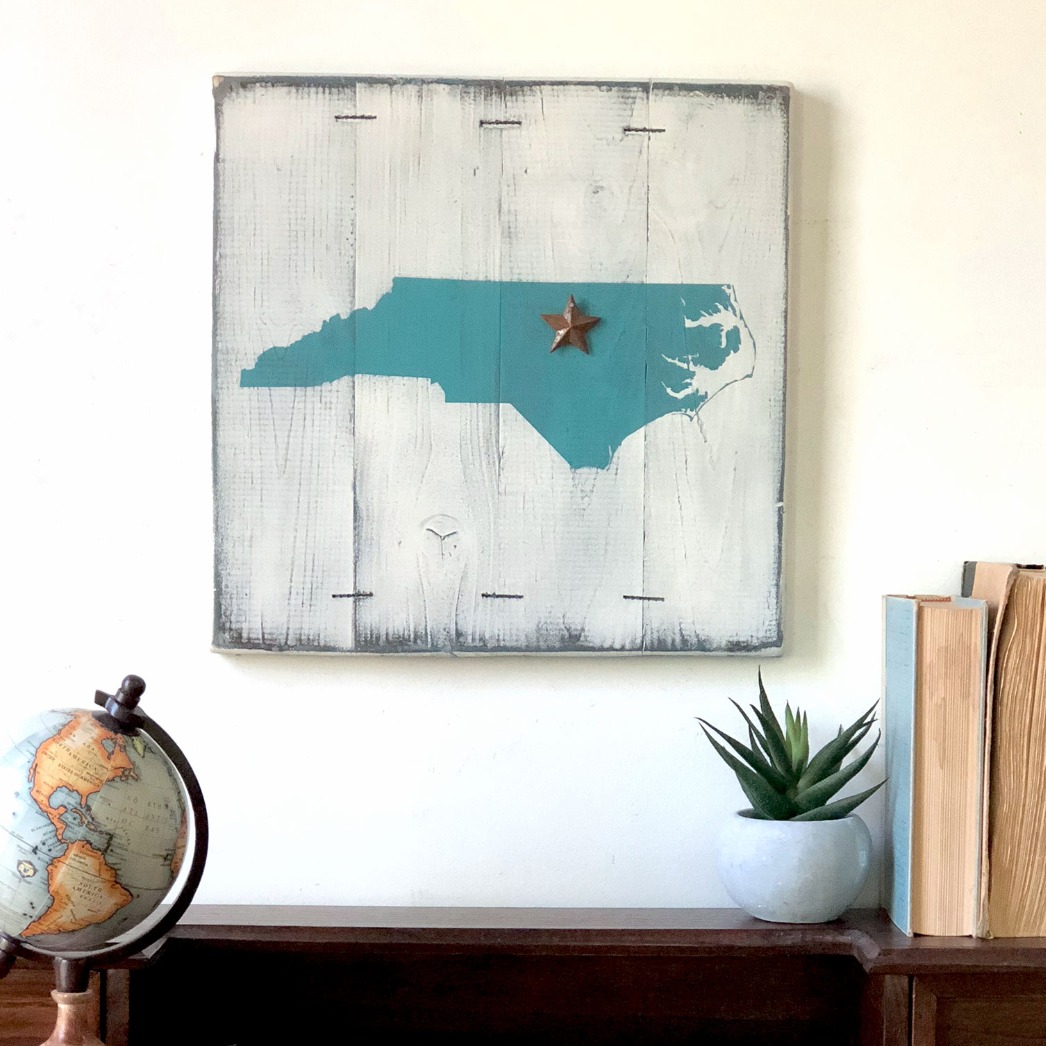 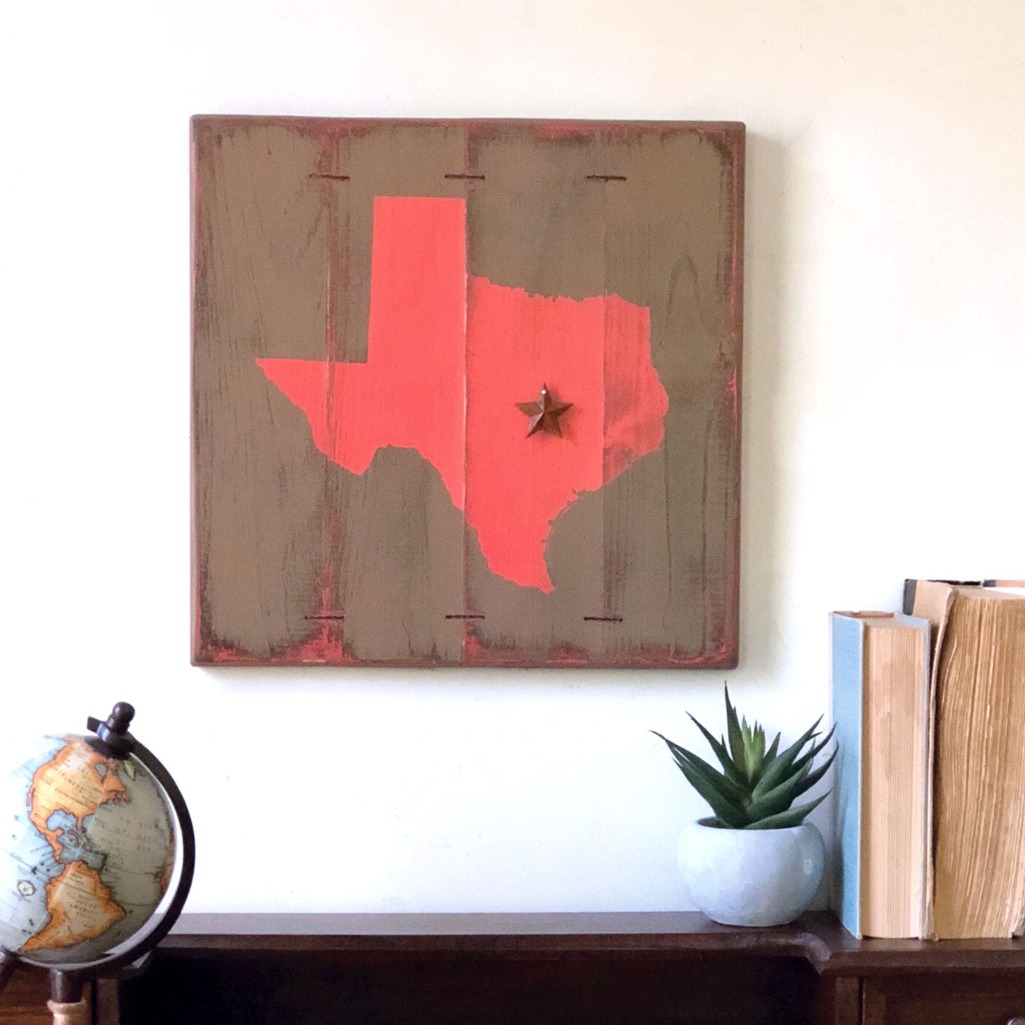 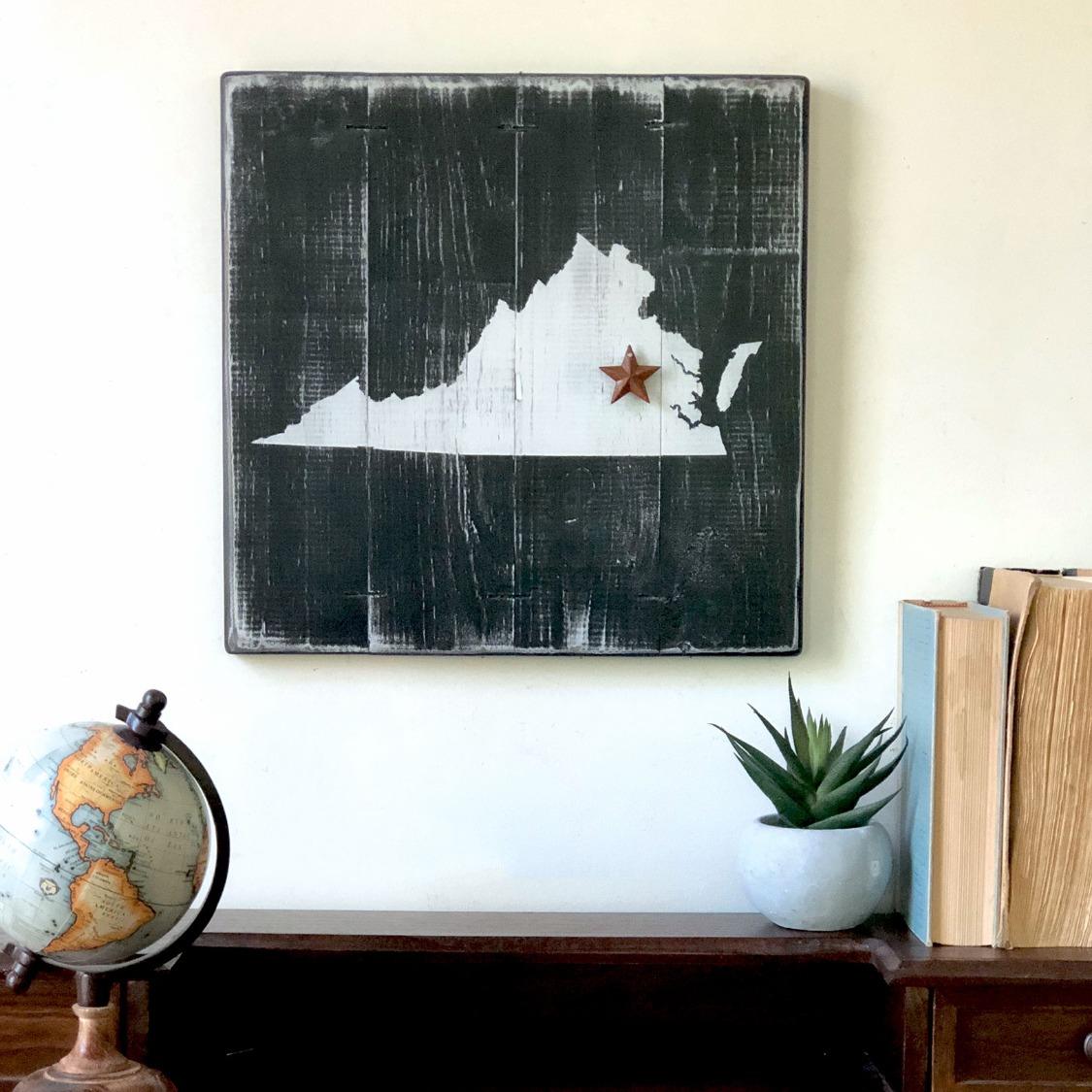 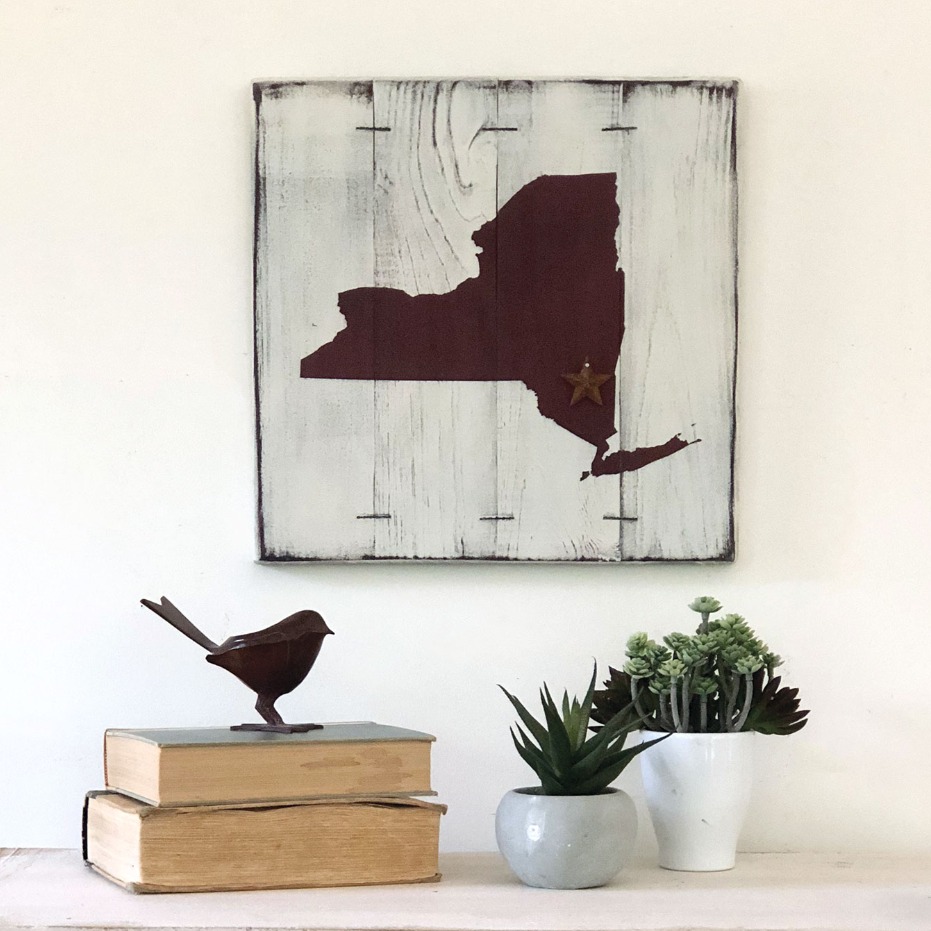 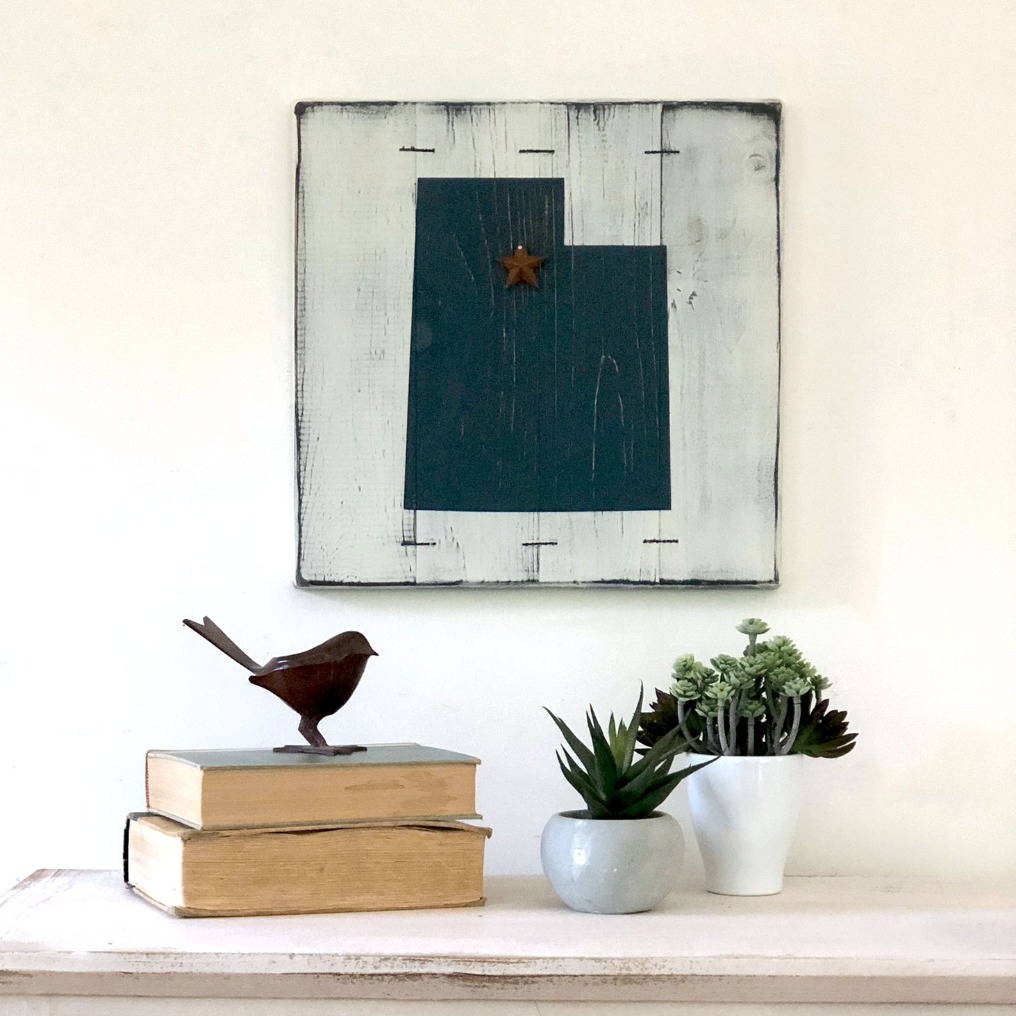 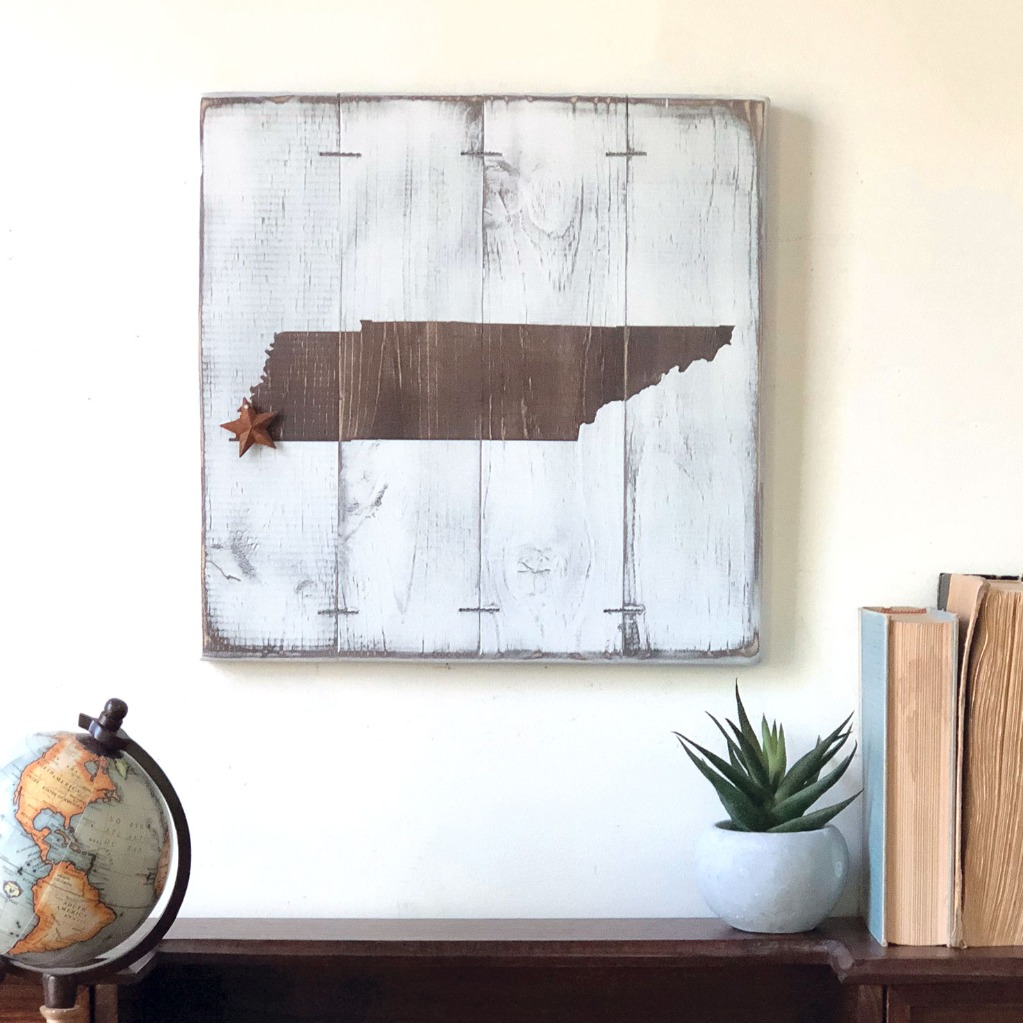 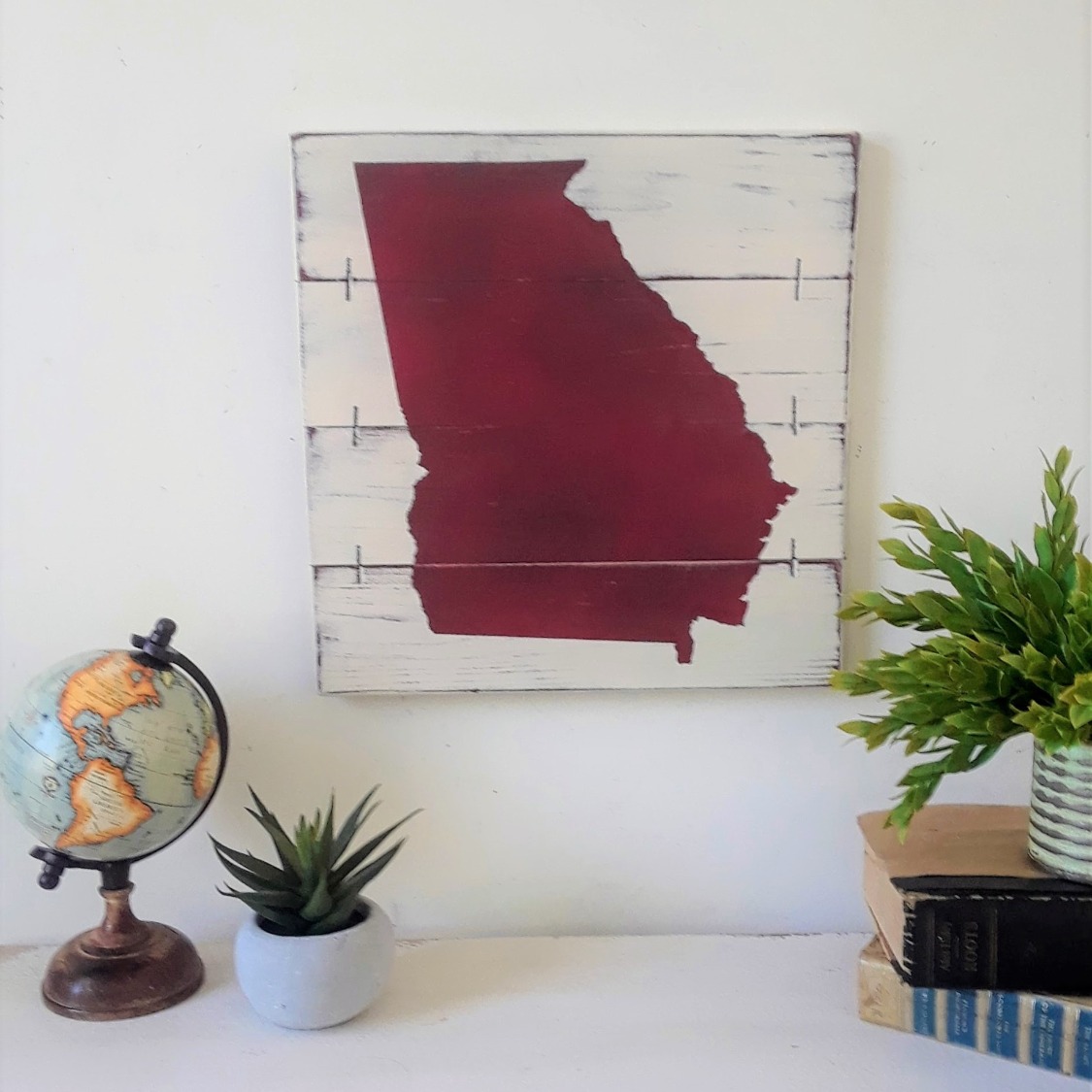 Finally, any discussion about state spirit requires mention of some fun facts, right? Here is one fun fact from each state (source: infoplease.com)...enjoy!

Alaska - The longest coastline in the U.S., 6,640 miles, greater than that of all other states combined

Arizona - The most telescopes in the world, in Tucson

Arkansas - The only active diamond mine in the U.S.

California - “General Sherman,” a 3,500-year-old tree, and a stand of bristlecone pines 4,000 years old are the world's oldest living things

Delaware - The first log cabins in North America, built in 1683 by Swedish immigrants

Georgia - The Girl Scouts, founded in Savannah by Juliette Gordon Low in 1912

Hawaii - The only royal palace in the U.S. (Iolani)

Illinois - The tallest building in the U.S., Sears Tower, in Chicago

Kansas - Helium discovered in 1905 at the University of Kansas

Louisiana - The most crayfish: 98% of the world's crayfish

Maine - The most easterly point in the U.S., West Quoddy Head

Maryland - The first umbrella factory in the U.S., 1928, Baltimore

Michigan - The Cereal Bowl of America, Battle Creek, produces most cereal in the U.S.

Missouri - Mark Twain and some of his characters, such as Tom Sawyer and Huckleberry Finn

Montana - Grasshopper Glacier, named for the grasshoppers that can still be seen frozen in ice

Nebraska - The only roller skating museum in the world, in Lincoln

Nevada - Rare fish such as the Devils Hole pup, found only in Devils Hole, and other rare fish from prehistoric lakes; also the driest state

North Dakota - The geographic center of North America, in Pierce County, near Balta

Ohio - The first electric traffic lights, invented and installed in Cleveland in 1914

Oklahoma - The first parking meter, installed in Oklahoma City in 1935

Pennsylvania - The first magazine in America: the American Magazine, published in Philadelphia for 3 months in 1741

South Carolina - The first tea farm in the U.S., created in 1890 near Summerville

Tennessee - Graceland, the estate and gravesite of Elvis Presley

Vermont - The largest production of maple syrup in the U.S.

Virginia - The only full-length statue of George Washington, placed in capitol in 1796

Washington - Lunar Rover, the vehicle used by astronauts on the moon; Boeing, in Seattle, makes aircraft and spacecraft

West Virginia - Marbles; most of the country's glass marbles made around Parkersburg

Wisconsin - The typewriter, invented in Milwaukee in 1867

Wyoming - The “Register of the Desert,” a huge granite boulder covering 27 acres with 5,000 early pioneer names carved on it

Let us know your own "fun fact" when you place your order!

Jess and the team at Woodstock Rustic